The more cash a ministry can generate, the less debt it will need to incur.  This results in less interest being paid to lenders and more money to fuel ministry.  Over the last three decades, Oaster has worked with all the major fundraising organizations and many times with the top three – RSI, Injoy, and Generis.

To support and enhance the campaign, Oaster will provide presentation drawings and illustrations along with a 3-D virtual tour of the new facilities.

Oaster leads the effort to secure both construction loans and long term mortgages for its ministry partners.  Funding comes from a variety of sources including bond companies, traditional banks, and private investors.

Back in 1985, Brad Oaster personally started the church loan division of Central Bank in Walnut Creek, California.  Central Bank was later bought by Bank of the West and the church loan division has now financed more than a billion dollars in church development.  Today, Oaster creates the loan packages for its ministry partners, selects various lenders to bid on the loan, and helps the church leadership to determine which offer is best for the ministry.

Oaster then helps the church to develop an aggressive “pay off” strategy to retire the debt as soon as possible, thus releasing more funds for ministry expansion.

Are You Ready To Build Your Future?

Brad Oaster started his career in 1980 as a carpenter building Central Christian Church in San Jose, California. 35 years later and with over 200 church facilities completed, Brad is now recognized as the #1 developer of Christian churches in America. 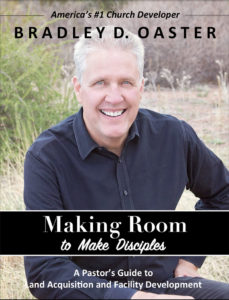